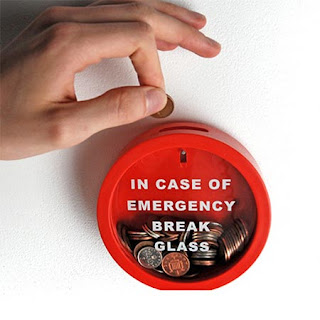 Grrr. My day got off to a pretty bad start today when my mobile chirped "beep-beep". A text :) From the bank :( Something along the lines of "Dear Lis of the North. Did you know you're overdrawn by nearly a grand?". Wtf?!!

Let's now rewind to four weeks ago. I went to the bank and instructed them to cash in part of my life insurance policy. I wanted the money to pay for our bathroom (nearly done). And some other stuff. That's not the point. So the guy typed away at his keyboard and presented me with a thing to sign, which I signed, and that was that. Job done.

Having concluded this life insurance business, I then proceeded with withdrawals from my current account, calculating that I had X amount salary less Y amount mortgage + various bills plus Z amount life insurance. Loadsa money. You can imagine my surprise and growing horror when I got that text this morning. I even feared for a terrible moment that someone had somehow got access to my account and was cleaning me out (wouldn't take long).

But no. I checked internet banking and the useless crowd of wasters still haven't carried out the instruction I gave them four weeks ago to transfer three pots of gold from my life insurance to my current account. So I rang the call centre, reminding myself to try not to be rude to the customer advisor. And apparently "it's perfectly normal, madam". Is it?! "Didn't the bank teller mention that it can take up to 30 days for the instruction to go through?" Er, no. And why the hell does it take up to 30 days? I know it's the credit crunch and all that, but surely the bank doesn't need my miserly few euros to shore up its capital?

This is the third time the incompetents have messed up transactions on my account this year. Had enough. Will be opening an account with a proper bank providing proper customer service* very shortly. I figure that, given that I have no choice in paying bank charges (yes, here in the third world "free banking" is a completely unknown concept - a bit like "lane discipline"), I may as well get my money's worth.

*NB: may I had the caveat that this counting house only qualifies for such praise because so far I have been satisfied with its measly efforts.
Ramblings by Lis of the North at 7:47 pm 4 comments:

Baby it's cold outside

And yesterday, in the north of Britain, it was absolutely peeing it down and raging a gale. So not the best weather to embark on a 24-hour adventure fell race methinks. So when the news broke yesterday afternoon that hundreds of fell runners were stranded on Honister Pass and elsewhere on the Borrowdale Fells, my reaction wasn't very sympathetic.

Many summers of my childhood were spent at High House in at Seathwaite so I have more than a passing acquaintance with the area. And when it's blowing a gale and veritable curtains of rain are rolling down the valley, even the hardy FellFarers only don their Berghaus jackets and boots if the planned walk ends in the pub. No sane person would want to embark on an endurance race. (There is some debate as to whether endurance race competitors can be classed as sane in any case, of course ;) )

Some reports are making it sound as if the 700 or so still out in the hills are definitively stranded and rescue teams are being scrambled as I type. This may not be the case. Probably most of them will get back down by themselves because we're dealing with experienced adventure race participants here. But a few may well need rescue assistance. And this touches on a subject I have my own particular views on: should practitioners of extreme sports take out insurance to cover the costs of any rescue they may require in the course of their sport?

Already in France, authorities can demand payment towards search & rescue costs. There is no distinction made between pure dumb luck leading to an accident, and reckless or rash behaviour meaning one ends up in a fankle. Everyone is liable.

Disclaimer: I'm not dissing endurance racing or adventure racing. Most people who organise and take part in such events are fully appraised of what races involve and they know what they're doing. Being fully aware myself of my own abilities, I would never have even considered so much as a stroll in yesterday's conditions in Cumbria. Nae chance. But I just feel that if you go out in crap weather, knowing that it will be difficult, tiring and dangerous then you should pay for any rescue you might require if you get cold and wet and stuck. Because you knew the risk and took it anyway.

And let's make another thing clear: anyone who requires medical assistance because they have tripped/slipped/fallen/taken ill should be evacuated as soon as is safely possible. I've fallen in the hills, I still have the scar to remind me. It hurt. I managed down by myself with no damage done, so lucky me. My dear Mum tripped and fell face first onto a rock. She was lucky she also made her own way down off the mountain and only required one stitch to her forehead. Phew.

So what do you think? Search & rescue is costly, and can be very dangerous in mountainous regions where the weather can change fast. Should the "customers" of these services participate in the cost? And under which terms? Anyone rescued, no matter what the circumstances? Or limited to those who are considered to have behaved rashly? If you're struck down by acute appendicitis when up a mountain, should you pay for medical evacuation at the same rate and under the same terms as someone who left their tent at home to keep their kit light, and finds themselves without shelter on a shitty, wet and windy night? Or should rescue remain fully free for everyone, no matter what the circumstances?

The 12 mountain rescue teams in the Lake District National Park cost around £500,000 a year to keep them going. That's just their kit, and doesn't include the additional cost of helicopters (which are actually rarely scrambled). MR teams are charities, manned by volunteers (my Dad was once of their number!) and are funded almost entirely through public donations (not unlike the RNLI).

Is it time to adopt the approach used in France, Switzerland and elsewhere? Should hikers and paragliders and windsurfers and dinghy sailors take out insurance to cover potential rescue costs if they end up in a spot of bother?

Please note that the event taking place this weekend is not to be confused with the Borrowdale Fell Race, a half-marathon that takes place on the first Saturday in August at which a jolly good time is had by all. Especially the checkpoint crews.
Ramblings by Lis of the North at 9:04 am 3 comments:

Was pleased to see a post from Sugar007 when I checked Google Reader the other day. Was even pleaseder when I realised I could pilfer her excellent post idea.

So here's the drill: use your blog as a therapeutic platform through which you can fess up to your biggest and ugliest and most wartiest personality traits. I have no idea if airing your dirty linen on the virtual washing line in such a manner goes any way to helping you curb your worst excesses, but I do believe it's probably a good exercise in honesty.

These are the things about me that I like to pretend aren't real:
But on the positive side, when I say I'm sorry I truly mean it.

There! I don't know if I feel better having picked out all the ugly bits of me, but I'm not editing the list or tweeking it. I'm just gonna hit the publish post button.
Ramblings by Lis of the North at 8:18 pm 5 comments:

Well, I wouldn't walk 500 miles to walk my dog, but we did take a two hour drive yesterday just to take her to the beach at Fort-Mahon! What can I say, she likes that beach. And incidentally we stopped in to see Stéphan who was there for the weekend. 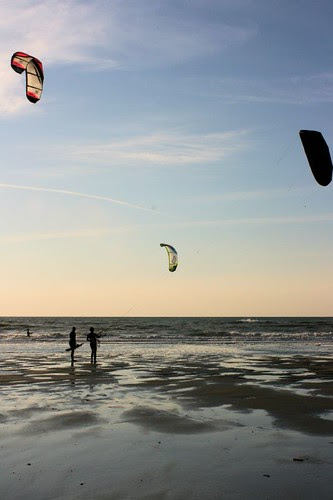 Went out for dinner just in time to catch the sunset 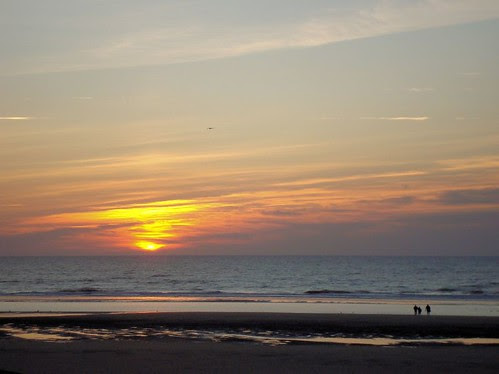 Had moules frites (mussels and chips) for dinner, then whizzed home and aahed at a lovely waning hunter's moon on the way.