Indeed, this time next week Bloke and I will be married. What an odd thought!

We arrived in Scotland late last night having got up frighteningly early to catch an early eurotunnel crossing. As we wanted to stop in to see the elders on the way, I suggested we take the A14 and just pick up the M6 so we'd be on the right side of the country. Well it was one of those times when a crystal ball would have been a useful thing because just after leaving Stafford services we spent three and a half hours in a tailback! It took us from just before one until gone half past four to get from just south of Stoke to Crewe. Which meant we didn't get to the elders until lateish, and then with warnings of foul weather coming in from Dad, I made another executive decision and we took the A7 rather than the A701. And got stuck behind a caravan. Result was we weren't home until gone 11pm, making for a day of around 19 hours on the go.

This morning we were both awake early so no hope of a lie-in to recover. The menfolk went into town to get Bloke's kilt and Mum and I tried my dress on.

Then Bro came round with Super nephew. The menfolk went out again to pay the bill for the reception and buy some boxes (?), and Mum and I babysat 'cos Pete got called in to work.

And then the menfolk returned, taking over with Super nephew so Mum and I could go to the florist. Confirmed the composition of the bouquets and buttonholes/corsages so that is another thing to tick off the list.

Half of me wants to go to sleep, and the other half thinks that there are surely some things to be doing. Any ideas?

I think quite a lot of me would probably enjoy a cup of tea and a listen to the test match though.
Ramblings by Lis of the North at 4:06 pm No comments:

Should you happen across my blog

Welcome, unsuspecting web user. Welcome to the World of Lis.

Yes, this is my humble blog. Maybe I'll be quite good at updating this unlike my website. Ha ha ha.

Only time will tell.

As I don't have anything of note to say today and should really be doing other stuff (like defrosting the freezer -- be still my beating heart), here's a photo: 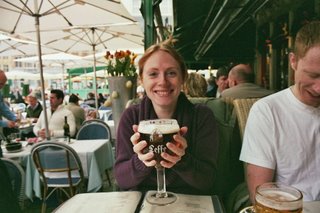 Yup, it's Fay enjoying a rather large glass of beer in Bruges. Cheers.
Ramblings by Lis of the North at 2:16 pm No comments: