Forgive me the levity of the post title, because I actually have rather a serious subject for you today (for a change). Anyone living in the UK or who follows UK events will know that Yorkshire schoolgirl Shannon Matthews was found alive by police yesterday lunchtime. Good good. She had been reported missing 3½ weeks ago, after failing to come home from a school swimming lesson. And now she's been found, she's alive and apparently in good health. So far, so happy ending.

But the thing here is not the happy denouement to the whole affair, it's the comparison I wish to draw between media coverage of Shannon Matthews' disappearance, and that of toddler Madeleine McCann, who went missing in Portugal in May last year. You can't not know about young Miss McCann, you can't not have seen the acres of newsprint, hours of airtime, and kilometres of blog posts surrounding her mysterious disappearance. The McCann story was the lead story for days and days after she was reported missing. And Shannon Matthews? Well, I think they lead with her story on two occasions: the day or day after she was reported missing, and the day she was found. Maybe that's not quite true, but the last 3 weeks have certainly not been non-stop Shannon.

Let's do a quick and highly unscientific Google test, shall we. Shannon Matthews typed into Google.co.uk brings back 536,000 results. This less than 24 hours after she was found alive and apparently well a few miles from her home. Right, what of the McCann girl. Madeleine McCann brings back only a few thousand more: 542,000. But Maddie McCann returns a further 300,000: 746,000.

I have my own, somewhat cynical theory to explain the disparity. Madeleine McCann is a photogenic blonde, blue-eyed little girl, daughter of a not unattractive couple - mother a GP, dad a heart surgeon. They live in a Leicestershire village, in a big house and they go on nice family holidays to Portugal (where they then think leaving the kids alone in the holiday apartment is a good childcare plan, but that's not the point here). Shannon Matthews is a smiling brunette schoolgirl with a cute spattering of freckles across her nose and cheeks. But her parents are, for want of a less pejorative term, schemies. Her mother has 7 kids from five different fathers, and (don't hate me for being blunt), is less easy on the eye than slim, well-dressed Kate McCann.

And, let's face it. A housing estate in north Yorkshire in February is a zillion times less glamorous than a sun-kissed Portuguese beach resort in May. Ach, I dunno. The disappearance of any child is a tragedy for that child and its family. There can't always be good news as in the case of Shannon Matthews. But I suppose I just wanted to point out how picky and choosy the media is when it comes to covering some events, and how fickle and shallow editorial choices seem to be, based on the knowledge that a pretty toddler from a well-to-do middle-England family will always sell more cheap papers than a cheeky-looking brunette with a single-parent mum on some northern council estate.
Ramblings by Lis of the North at 11:00 am 6 comments: 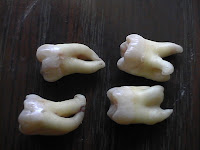 This picture is not of my teeth. Dr Oral Surgeon said they didn't keep mine. I suspect this is because they had to obliterate them into tiny pieces to get them out. Anyway, see the top right-hand one with the wiggly root? Imagine it with four wiggly and long roots, each wiggling in a different direction. That was my teeth. I feel quite proud of my singularly wiggly wisdom teeth roots. Indeed, Dr Oral Surgeon said they had never seen such wiggly ones.

So now I am wisdom toothless, dentally regressed back to adolescence. Thank heavens that's only a sort of figurative state, as it were. Imagine having to be a teenager again??!! Ugh. Everyone was extremely kind, even the anaesthetic nurse who stabbed me repeatedly with the needley things, and had the temerity to say she couldn't get the cannula in because of *my* wiggly veins (I dunno, wiggly teeth, wiggly veins ... should I rename the blog "attentionallwiggles"?).

Hubby goes on 20 March for the same torture. I really hope he doesn't feel as bad as I did post-op. I cried in recovery. All I could say was "mal" (sore). They said "how sore, on a scale of 1 to 10" and I held both hands up. I'm a baby. If I could have articulated more than one word, I would probably have asked for me Mum. So, they pumped me full of some nice drugs that made me feel sleepy and dribble, which was very pleasant in a strange sort of way.

And can I just say, based purely on our experience of French healthcare (and I hope none of you ever find yourselves in a situation where you need to choose), better to be in a private clinic than a public hospital because it's cleaner. Everything was clean. When Hubby was in a public hospital last year with his ankle, it was pretty grotty actually. The staff were very kind and competent, but it was dirty. And they were chronically short-staffed. The poor nurses were desperately over-stretched. Not in the private clinic. But that's one person's experience and cannot be generalised, I hasten to add.

And as for the tube in my nose, I have no recollection of that at all! I think I wasn't really all that conscious when I first came round. And that will make sense to anyone whose brain works like what mine does.

Thank you everyone for your kind comments. I much appreciate your indulgence of my scaredy cat-ness!! And I hope your wisdom teeth aren't wiggly xx
Ramblings by Lis of the North at 11:03 am 5 comments: