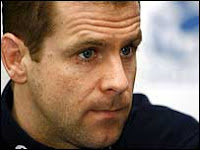 Good thing Chris Paterson was a reliable as ever with his right foot. And he's fairly easy on the eye for all the close ups when he's eyeing up the posts before kicking. 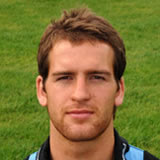 I (with no bias whatsoever!!) thought the Scots actually played a pretty decent game. Remember the lads were out there against SIXTEEN players and not the usual fifteen. And one of the players on the other team had a whistle and was allowed to make important decisions about the game. Such as not even giving Masi a talking-to after his rather late tackle on Rory Lamont. The poor guy really landed with a thump on his face. That could have had terrible consequences. He could have been badly injured or even lost his good looks! That would have been dreadful.

Other strange refereeing decisions included sin-binning Nathan Hines for a high-ish tackle in the second half having allowed Troncon to attempt to decapitate Dan Parks in the first half without so much as a stern look. I feel like trying to decapitate Parks at times too, but that's no excuse! Oh and ignoring much tripping by his fellow team-members. Er, I mean by the Italians.

That said, Scotland really do need to get their act together because they won't be able to muck around like that against the Argies and get away with it. The Argies have one thing the Italians didn't. No, not a referee, but discipline. And if I set aside all national affinity, I have to say them Argies are looking like a good rugby team. Hopefully they'll be feeling very unlike a good rugby team next Sunday, eh?
Ramblings by Lis of the North at 10:05 am