Back to work today. :|
Don't really like it. I don't know how many messages were in my Inbox this morning after two and a half weeks away. A lot. A big lot. And of course there's always one who hasn't figured out 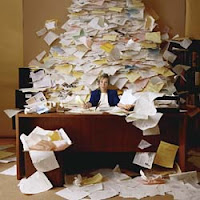 what the Out of Office Reply message means. When you send me a mail and an automatic reply comes back straight away, saying I'm back in work on 20 June and telling you who to contact in my absence, that means I am not in the office and I cannot read your message. So there is no point in sending THREE more messages over the next two days asking for a file that I cannot send to you because I am not in the office and have no knowledge of your file. Sending lots of messages will not make me suddenly appear.

Hmm, sorry for that minor rant, it's just that the whole not understanding the Out of Office Reply thing really bugs me. It's not that difficult a concept, is it? Anyway, there were plenty of other messages from people who knew full well I wasn't there but had nevertheless decided to ensure I wasn't short of stuff to do on my first day back. Hey ho. I suppose it is better than sitting there with nothing to do... Isn't it?

And while I'm having a grouse, amongst the huge pile of paper mail awaiting me (ha ha paperless office), most of which was invoices, was a letter from a supplier we stopped working with at the end of last year. Early this year they emailed to say they had outstanding invoices. A quick check revealed we'd never received them, so we asked the agency to send some duplicatas. They finally came while I was away. And in the bundle was an invoice dated 30 April 2006. Surely that's taking the pee a bit, no? That gives you some idea as to why we don't work with this particular supplier any longer - poor organisation.
Ramblings by Lis of the North at 9:00 pm