I carried a watermelon

Anyone with any semblance of cinema culture will instantly know what I'm talking about here... What, you don't know? Dirty Dancing of course, which is cult viewing as far as I'm concerned. The other night I decided it had been quite long enough since I'd indulged my sad habit so I stuck it in the DVD player and wallowed in girly nostalgia.

In fact, this film holds a special place in my heart. When I was sixteen I visite 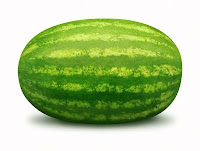 d Wisconsin, USA on a youth exchange trip. Students from Wisconsin University have the possibility to study one semester in my home town, and from there came the idea that a youth exchange between our town and UW towns could be a good idea. So off we went. I stayed with Jim & Marcy along with my friend Jane. (I'm getting there, hang on.)

One evening Jim & Marcy were invited to their GP's retirement party so Jane and I were home alone. In a big house with a big garden mostly surrounded by corn fields. In the middle of a tornado weather warning. And we, for some unfathomable reason, decided to watch America's Most Wanted on TV. Naturally we worked ourselves into near hysteria, and had to watch Dirty Dancing to calm ourselves down. Later that same week, we bought watermelons at the supermarket. And carried them. :)

It has since become a truly cult film for Jane and me. Brings back many happy memories.
Ramblings by Lis of the North at 12:36 pm