Party under the sun and clouds 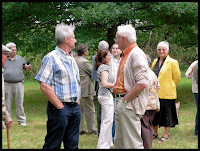 We just spent the weekend at Hubby's dad's farm in the Sologne region of France (just south of the Loire around Orléans). Saturday he held a family party to celebrate his 60th birthday and our wedding. It was another lovely day and interesting to meet many of Hubby's family. There is quite a strong family resemblance actually it's rather striking. And one of the cousins gave Hubby a book of his family tree. They have managed to trace back to 1609. Fancy that!

We (hubby, parents and I) arrived on Friday early in the afternoon. Immediately got to work blowing up balloons and making them into sort of balloon arrangements and attaching them to the picnic shelter down at the pond (well, it's a small lake really). Unfortunately we lost a few in some heavy rain showers. So we changed tack and just filled the Clio with balloons ready for the next day and last minute decorating.

Once the car was full, the menfolk helped the marquee people to put the marquee up (they only turned up at about 5.30pm!) and Mum and I took Doggy round the farm. Poor Doggy, she unwittingly tested the electric fence round the corn fields (used to keep wild boar from getting in the fields and scoffing the tender corn shoots). She got such a fright I felt so bad for her.

Bro, whom we had expected to arrive for dinner, got stuck in some especially nasty Paris traffic and they finally turned up at gone 11pm. Super nephew was in a good mood though and had been really good on the whole journey (from Selsey to Romorantin!).

Fairly early start on Sat. to lay the tables and empty the balloons from the Clio. Weather looked ominous but in the end the sun shone nearly all afternoon, with only one heavyish shower. Yet again, step-mother-in-law had orchestrated a veritable banquet. She should go into events hosting, I swear. We had giant pike (from the currently-drained pond), two whole legs of ham, various yummy salads and some rather magnificent cakes. The French are quite good at eye-catching cakes.

All in all it was a lovely day and a pleasant weekend. I just wish we could have stayed for longer. Parents and Bro and his hangers on are spending the week at the farm the lucky things. Wish I could have stayed on to enjoy super nephew. Of course, Doggy doesn't reckon much to him. Stumpy little person, she probably thinks! He is quite fascinated by Doggy, but fortunately for Doggy his attention is often quickly distracted. I have plans to teach him to pull the hairs on his dad's legs. :)
Ramblings by Lis of the North at 5:45 pm

Supercute! Love those big brown eyes! Glad you've been having a good time :)