Time is a jet plane, it moves too fast 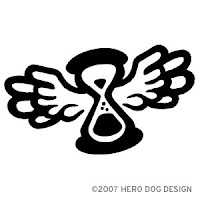 Wtf?! It's Monday again already. How on earth?! The last few days have whizzed by at an unnatural pace.

It was a strange week to start with, Tuesday 11th being a public holiday. Normally I would have had a looonnnng weekend, but Mum & Dad were coming over, so I worked the Monday and took Friday off instead. So I worked Monday, off on Tuesday, back on Wednesday and Thursday morning then weekend again. But enough about work.

I managed to give myself food poisoning from raw milk. Note to self: next time you buy raw milk, go straight home and put it in the fridge. Do not stop for a three-hour lunch. That was quite unpleasant. Have beaten it into submission with some tablets.

Mum & Dad came over. Hurray! That's always a good thing. Unfortunately they had a bit of an eventful trip here. Somebody driving a Jag northbound on the M11 managed to lose control and skid into the crash barrier, spraying up mud, stones and debris at just the exact moment Mum & Dad were overtaking a lorry southbound. Aforementioned debris rendered their car undriveable (is that a word?) by smashing the headlight, ripping the bumper, smashing part of the wing and so on. Poor Mum & Dad! At least my Dad had the sang-froid to keep driving straight ahead. I fear I would have tried to swerve left. Into the lorry. And thank the Lord, and the Highways Agency, for crash barriers. They keep out-of-control Jaguars on the other side of the road.

So anyway, poor red car was rescued off the hard shoulder and Mum & Dad carried on in a hire car. I think poor red car has been stretchered home to Embra for cosmetic surgery. Mum & Dad are now headed back home, in another hire car. It's a bit of a long story so I'll not bore you any further.

The main reason for Mum & Dad visiting this weekend was to go to the wine fair. This is held every year on the 3rd weekend in November in Lille. Hundreds of wine growers from all over France come to peddle their grapey wares. It's very useful for people who like to drink good wine, because you can get quality stuff at a reasonable price and you don't have to do a tour de France to get your mitts on it. We practically only buy wine at the wine fair now, and on holiday. No more supermarket buying for us. We're such wine snobs. So anyway, we did that and spent money but not too much and have some yummy wine to drink.

Because of 1/ shit weather; 2/ Lis having food poisoning we didn't really do a whole lot else, but we had a lovely time even so. I will admit to snivelling to myself as I drove to work this morning, having just waved goodbye to my parents as they left for Calais. Poor Mum & Dad, they are still on the sodding M11! Maybe by now they'll have made it to the A14 perhaps. The thieving insurance company were supposed to provide them with a courtesy car to go back to Scotland in, but then they cancelled it because apparently "the other party hasn't admitted liability" (that'll be the plonker in the Jag). Who gives a stuff? He probably doesn't even know he nearly hit another car. The insurance companies can fight it out later, but my parents need to get home! Then they drove around all of Cambridgeshire trying to find where to return hire car #1.

Anyway, I did say I wouldn't go into that.

So, my point was: crikey where has the weekend gone? Where did last week go? Now I'm home alone (with Doggy of course). Hubby at meeting in Paris. Parents on m'way somewhere. House is quiet and empty. Lis feels quiet and empty. I guess I'll be able to catch up on the 54 unread items on my reader this evening.

Image credit: Hero Dog Blog
Ramblings by Lis of the North at 7:13 pm