Let's get behind the wheel 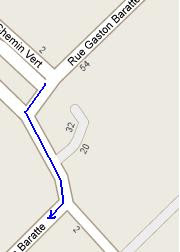 Our house is just off the main street through the village. Just at the end of the main street before a left-hand/right-hand double bend (we call it the chicane, because it goes left then right, like a chicane strangely enough).

You can't miss the bend. As you can see on the stunning illustration to the left (please excuse the rather crappy Paint-job here!), it's a pretty sharp turn. As you approach, there is a raised speed-hump-traffic calming thing, and they have surfaced the road with that beige "super grip" stuff. There are also big blue and white arrow signs stuck on the barriers on the curb (they put the barriers up after one time when a car actually ended up in the front door of the house on the corner (I'm seriously not joking)). But every week (again, I'm not joking) a car manages to miss the corner completely and carry on up onto the pavement.

It's just happened how, as it goes. The second in as many days. Yesterday someone kerbed quite badly in the snow. Any how, that's what gave me the idea for this post just now. We heard a screech and a bang. Like the busybodies we are, we tore upstairs to have a good ogle out the windows. Looks like a Clio. And it must be well and truly stuck because the chap hasn't followed usual procedure of just reversing off the pavement and carrying on.

I just don't get it. The chicane is in a 30 kmph (20 mph) zone. They put down super grip road surfacing (a sure sign of the need to go slow). There is a massive speed bump hump thing just before it. And still they come. I don't know if it's because people are going way too fast, they aren't paying attention, or what. Too fast I think. But I still don't get it.

It would be funny if it weren't that the poor folk who stay in the house right on the corner have had to have their front door replaced and part of their front wall rebuilt. They now have concrete blocks in their front garden to slow any out-of-control vehicles. And another chap who lives next door but one to that house got rear-ended by a driver who managed to miss the barriers but rode up the pavement and slammed into the parked cars. And then left the scene. Plus every time the barriers get knocked down, whose cooncil tax do you think it is funding their replacement?

Like I say, it would be funny.
Ramblings by Lis of the North at 8:32 pm