A soldier of the great war

Walter Pixton joined the Royal Fusiliers on 3 February 1916, aged 19. In due course he was posted to the Somme, and during the course of the battle was severely wounded on his left leg.

Struggling to make his way towards the medical facility, he was given assistance by a soldier from a Scots regiment. This man supported him until they almost reached their goal when a barrage started up.
The Scots soldier was seriously wounded by the flak, so the two men helped each other to reach medical help.
Eventually they were put into adjacent beds. The Scots soldier was aware that he had been fatally wounded and he gave Walter his kilt because he had no family to send it back to.
Walter was returned to his family in Ulverston, Lancashire (now Cumbria) to recover in a local convalescence home. He was discharged from active service in December 1917 due to being no longer fit for War Service.
He gave the kilt to his mother Elizabeth Pixton, who carefully unpicked it and made it into a carriage rug. It was also used as a table covering in the family parlour for many years.
Eventually it came into the possession of Walter's daughter and youngest son. We would like to give it to the Somme 1916 museum, as we consider it to be part of the history of the battle, shabby though it may be.
We never knew the name of the Scots soldier.

The above is a letter written by my dad's cousin Maureen and her brother, accompanying the donation of the Scotsman's kilt to the museum of the Somme, in Albert (Picardy). Walter Pixton was my dad's uncle on his mother's side. It was only a year ago we found out he had served in the Great War.

Mum and Dad were here last weekend. We went to the town of Albert and visited the museum. Dad was pleased to see the kilt on display, and took several photos. He's planning to visit the Scottish National War Memorial in Edinburgh Castle in the hope that staff there may be able to help him identify the unknown soldier's regiment. 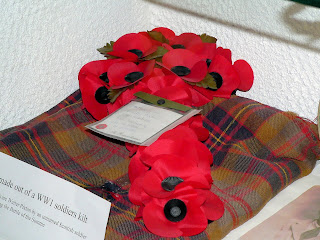 Ramblings by Lis of the North at 1:11 pm

Wow - what a fantastic story! Thanks for sharing
xx

How cool it was decided to donate the kilt to the museum ... though finding the regiment should prove a daunting task. You'll have to keep us updated if they find anything --

cool - if i get out to do the somme half marathon it starts in Albert so I'll have no excuse for going to the museum... bro' .

What a beautiful story. And fascinating too. There's a strange silence in Albert isn't there? I find it such a sad town. Picardie is so rich in history, but just so decimated.

Will keep you all informed of any news on the regiment search.
Miss D I have to agree. It was even slightly unsettling. And to think that there is hardly a building there older than 80 years or so.

How funny, I came across this on a random search of my surname. I think we must be related somewhere along the line as my Grandad (who has now sadly died), Dennis Pixton was from Ulveston, his Dad was Walter (from your story I presume) and he has a sister Maureen. My Dad is Julian Pixton (middle name Walter!). I will make a trip to see the kilt now should I ever find myself in the area x Chloe Birr-Pixton x

Hi mayamum. How strange indeed! Yes, I think we must be related somehow as I can't think there are many Dennis and Maureen Pixtons in Ulverston. My family name is Blamire, and Maureen's married name is Foxon. Enjoy the visit if you ever make it to Albert.
Elisabeth.