Why we pay for European breakdown cover

Or how not to end your trip home for Christmas: 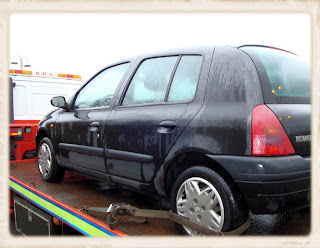 We set off back to France this morning but didn't get very far. We made a quick pit stop at services on the M74 in south west Scotland, and Hubby had barely finished reversing out of the parking space as we set off again than the dashboard lights lit up in their very own Christmas display, the power steering failed and the engine started to make a very unpleasant noise. Hubby promptly re-parked. We sat for a moment then he tried the engine again. Warning lights and nasty noise. Off again. Hubby got out (in the rather horrid wintery shower) and looked under the bonnet. Looking under the bonnet only serves to confirm to me that I know nothing about cars or diagnosing what might be wrong with them. I mean, I can identify different bits of what's under there, but my automotive knowledge stops there. We tried the engine again. Same result.

I got the book of words out and found the page about warning lights. Under the battery warning light it said: when this light comes on, stop immediately and contact your Renault dealer. Oh bum. Oh bum oh bum oh bum. Hubby decided some oil might do the trick, even though the engine management system said it had plenty. He ventured off to the petrol station and instructed me to call Dad as my bottom lip started to tremble.

Hubby returned with oil and the news that the chap at the garage had called out a breakdown truck. I had stopped crying and found the number to call the insurance company. Felt better after we had spoken to them as the agent did a good job of being reassuring in a "we're here to sort it all out" sort of way. That'll be why we let them rob us blind for cover, so that when we need them, they can say "don't worry".

Meantime, Mum and Dad had leapt on their white chargers (read red Mégane and green Clio) and were en route to ground zero. When the recovery truck arrived the bloke took one look under the bonnet and said "ah yes I see the problem, it looks like the crankshaft". Does that sound bad to you too? He said it wasn't a very major thing to fix, providing it hadn't damaged anything else (I like the disclaimer). We transferred everything to Mum and Dad's cars and, declining Dad's kind offer of continuing home in his car and leaving ours in Scotland, we went back to Midlothian. I have decided that I'd rather stay here until we hear from the garage on Monday how long it will take (and how much it will cost) before going back to France.

Needless to say, the insurance company is delighted that we decided to go back to Mum and Dad's rather than requiring a hire car to continue our journey. Of course it is, costs less! So we are having an unexpectedly extended stay in Scotland until the voiture is fit to travel. You'd think I'd be pleased at getting extra time at home but in truth I would rather be in my trusty motor speeding southwards. Some folk are never satisfied.
Ramblings by Lis of the North at 6:38 pm

Ahh ... I see I should have read your second post before asking how long you are home for!
Hope the car gets fixed soon
xx