Faced with an empty text box

My blogging has been lacking lately. No posts, no visits to my blogroll. No nothing. One explanation is that I have been avoiding my laptop. The horrid fluorescent felt tip pen came back and I didn't want to use my laptop in case it made it worse. Anyway, it seems to have gone away all by itself for the moment.

Another explanation is feeling slightly guilty (as deftly-explained by Princesse Ecossaise) about not maintaining my blog and visiting everyone else. Which is silly really, but that's what I'm all about, isn't it? Silly, I mean.

Yet another explanation is lack of anything blog-worthy to tell. Lately I've been low and worn out and just not right. I can't sleep because my brain likes to be awake at 4am and think about things in a very excited and busy way. My body thinks this is a crock o' shite but it can't get my brain to SHUT UP and GO TO SLEEP. It's been so bad some nights I've switched the light back on and reached for a book to pass the time until sheer fatigue inevitably takes over. Doc has given me some proper drugs because the drowsy-making anti-histamine tablets weren't making a jot of difference. I hope my brain will quickly come round to the idea that thinking is for daylight hours, and the only decent thing to be doing at 4am is sleeping.

Hubby is jolly fed up with his stupid job. When he tells me about the stupid working methods they have and management's flat refusal to invest in any tools that might make his team's job easier and help them produce better, more reliable results, I am struck by how patient he is. I just could not work in the environment he works in. I'd have shouted very rudely at people and probably assaulted my boss long since. Poor Hubby.

The company in the UK that wants a telephone interview hasn't been back in touch this week to re-schedule (the first attempt went nowhere due to difficulties with their conference call system), but hey. Hubby is very diligently practising his English. We used to speak mostly French to each other but now it's mostly English. I have taught him useful idiomatic English such as "innit" or finishing every other sentence with "but" (this is to prepare him for visits to Lanarkshire to see Bro & Family). But he is under strict instructions not to show off this mastery of modern English during any interviews!

Doggy is as delightful as ever. Here is proof: 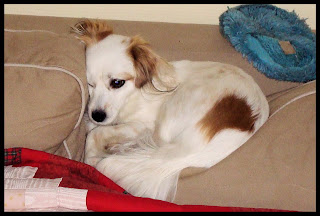 Pic taken with my new toy, which is now back from after-sales hell and works again. Obviously. That hairy blue thing behind her used to be a slipper, but she savaged it. She's that sort of a doggy. Can you tell from the photo?

If you were paying attention you'll have figured out that Bro & Family have finally moved West. They sold their flat very quickly (within two days of it going on the market!), but finding a new house didn't happen quite so quickly. And when they did find one and their offer was accepted, it wasn't looking likely they would get entry the same weekend they had agreed to vacate their flat. It was all a bit of a soap opera, but they are at last installed and have a postcode that starts with "G". The day they moved in, some curious kids from round about stopped by to see who the new neighbours were. Sis-in-law says she didn't understand one word they said. It's Sis-in-law's birthday today. Everyone say Happy Birthday.
Anyway, that's enough from me. I'm going to change my "currently reading" book and make a cup of tea and visit some blogs. Cheery-bye.
Ramblings by Lis of the North at 7:03 pm

awww ... don't feel guilty about not writing. It's nice when you do write, but don't worry if you don't!

I hate that brain racing,not being able to sleep thing. It happens to me sometimes - usually due to work-related stress - and then I feel totally exhausted the next day. Horrible.

Hi Lis. I often suspect one has something hidden or tucked away in the sub-conscious mind, and quite not ready to be dormant, which thus contribute to an unusual state of excitement and high activity in the abnormal hours of our bio clock.

Hope everything's fine, starting with your sleep. :) It's practically the foundation of every bit of our day-time work. All the best!

Perfectly normal, I take little breaks from reading and writing all the time. If our lives were so full that we had to blog about them every day, I imagine out heads would burst. :)

I think it's just something going around at the moment, I am struggling to find anything i think is interesting enough to tell folk about. However, I'm always interested in whatever you write. I'm that kind of nosey-parker! Good luck with the sleep monsters. They're an evil bunch that keep you awake at night. S'not you thats the propblem, it's them. Nasty little blighters they are.

Can you tell I'm not getting much sleep either at the mo'!
Lots of love toots.

Blogging shouldn't be a chore... so no guilt feeling please ! ;)

SG - It's very silly of me I know. I hope the tablets will beat my silly brain into submission. Hahah!

Stormrider I am convinced that something is worrying my mind, and I don't know exactly what it is, but it keeps my brain awake all night! It's very true that when you sleep well, everything seems easier the next day.

Jane, babes! I'm sorry you are having the night-time awakies too! Isn't it just utter shite? Must email you I'm having a trip home soon xx

hello pet lamb! Yes, the whole guilt thing after not having blogged for a while is horrible isn't it? It's strange...like when you feel guilty for not being in touch with a friend for months. And you poor soul, I HATE that 4am feeling!!!!!! I get it quite frequently and it does my nut in. And it's always between 3 and 4am...why?!!

Hope you get some good nights kip asap, and give a big kiss and scratch on the tummy to doggy from moi; she's just way TOO cute!!!